In this installment of Creature Features, we discuss the police and how to play them as protagonists and antagonists.

In this installment of Rogues, Wayne and Lyal discuss blackmail, which is surprisingly still around in this age of the overshare.

Citizen A: Thank you, Reptilon! Thank you for saving our city from Neo-Varlos!
Citizen B: Saving our city? Look around, it’s nothing but rubble now.
Citizen A: Yes, but Reptilon destroyed  those buildings by accident.
Citizen B: As opposed to Neo-Varlos who was intentionally trying to destroy them?
Citizen A: Exactly. Even though the results are the same, intention is all that matters in a kaiju battle.

A big creature feature this week as Chris, Wayne, and Lyal discuss kaiju (giant monsters). We draw out common elements and inspiration from the new Godzilla movie, as well as some old classics such as Gamera and the original King of the Monsters, Gojira. (Lyal also frequently mentions Yonggary, which is, according to him, the absolute worst movie ever made.) Then we stomp over to using these city-sized beasts as antagonists, events, and protagonists. It’s a truly titanic episode!

“A long bow and a strong bow,
And let the sky grow dark.
The nock to the cord, the shaft to the ear,
And a foreign king for a mark!”
– Robert E. Howard

In this installment of Warriors, we discuss the English longbowmen and Welsh lngbwmn (probable spelling). Listen to learn how surprisingly easy it is to make a longbow, according to Chris, and how to safely remove an arrow, according to Lyal.

This is another Wayneless episode. He refused to participate in protest over our refusal name this episode “longbowpeople”.

In a world where restraint has died, rifts crisscross the Earth, opening portals to other dimensions. Glitter Boys (not what you think), Cyber-Knights (what you think), Juicers (if you think “post-apocalyptic Lance Armstrong”, then what you think), and vagabonds (what you think – seriously) battle the evil Coalition, demons, and vampires. Are you ready for infinite possibilities, limited only by your imagination?™ (Yep. Palladium trademarked that.)

In this episode, Lyal and Chris provide an introduction to the game where anything goes and everyone is armoured like a tank: Rifts.

Publisher: Stellagama PublishingStarships riding fire across the sky. Heroes and villains exchanging laser fire. Desperate spacers struggling against an alien monstrosity. Vast planetary vistas, flying cities, moonscapes, mad robots, and first encounters. In short: high-action science-fiction adventure that stimulates your sense of wonder. Cepheus Deluxe: Enhanced Edition puts you in the shoes of an adventurer visiting distant stars and encountering the unknown. Whether you are a seasoned player looking for a rules-light game, or a new gamer wanting to experience what science-fiction role-playing games are all about, Cepheus Deluxe: Enhanced Edition opens your way forward. Cepheus Deluxe is a set of… [...]

The Atlas of the Latter Earth

Publisher: Sine Nomine PublishingFirst glimpsed in the pages of the Worlds Without Number RPG, an unfathomably far-future world of decadent sorcery and daring blades is now revealed in the Atlas of the Latter Earth. More than two hundred pages of fact and surmise are packed into this gazetteer, a full setting guide trimmed with additional game content for Worlds Without Number and a helping of the the system-neutral GM tools that so many love. While the book can be used whole as a premade campaign setting, it's also designed to be stripped down into individual countries and regions that can… [...]

Rivers of London: The Roleplaying Game

Publisher: ChaosiumMagic has returned to our world “I think becoming a wizard is about discovering what's real and what isn't.” —Ben Aaronovitch, Rivers of London In Rivers of London: the Roleplaying Game, players take on the roles of newly recruited members of the London Metropolitan Police Service’s special magic branch, aka “the Folly.” You will solve mysteries, catch criminals, and come to grips with the “demi-monde”—those who have been irreversibly changed by magic. What's Inside The Rivers of London: the Roleplaying Game core book contains everything you need to start exploring Ben Aaronovitch's magical version of London. The World at… [...]

Publisher: Dice Doctor GamesSpace. The final frontier.  Far from Earth, in the Noseya galaxy brave heroes explore the unknown.  As a low-level crew mate aboard a Federation Starship, like a janitor (that’s right) you land in catastrophe. You may now panic: everybody is dead! Can you best space like a hero or will you die on the very floors you mop? YOU MAY NOW PANIC is a wacky sci-fi micro-TTRPG and episodic scenario of a low-level starship crew, thrown into catastrophe.  Starter scenario can be run with minimal prep for 1-5 players.Price: $1.00 [...]

The Lost Temple of the Vethalam 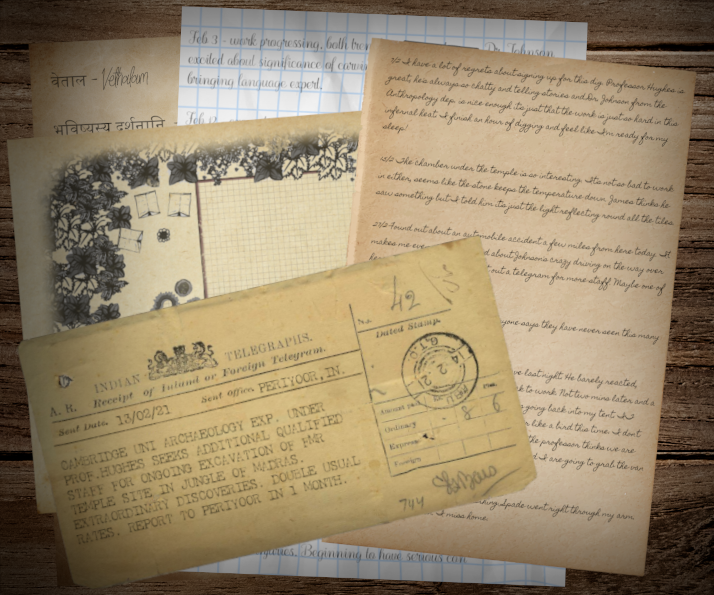 Publisher: ChaosiumAn archaeological team working deep in the heart of the South Indian jungle have unleashed something not of our world. The investigators arrive to find the site a bloodbath: a lone professor seemingly the only survivor and an invisible monster on the loose. But is everything what it seems? And what truly is the creature stalking them through the ruins? The Lost Temple of the Vethalam is a 1920s scenario based on a traditional Indian folktale for the 7th Edition of Call of Cthulhu by Chaosium. It is suited for 3-5 investigators and can be played in a single… [...]

Heroic Maps - Storeys: Hospital of the Sisters of Holy Sufferance 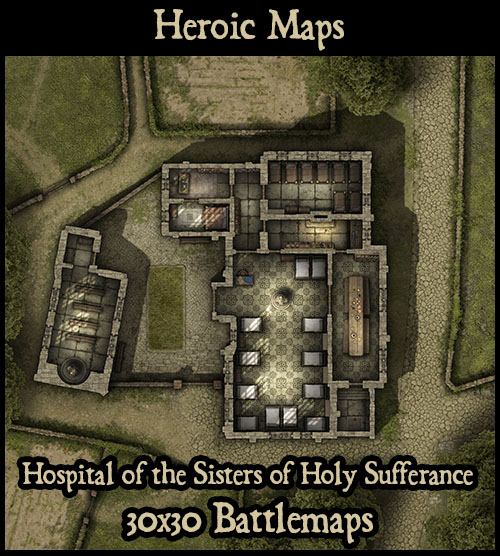 Publisher: Heroic Maps Hospital of the Sisters of Holy Sufferance For those that are ill or injured, the Hospital is a welcome place of healing. Or is it?   A printable battlemap compatible with any RPG/Dungeon-Crawl game. Use as a standalone gameboard, or combine with any same-scale tileset. Contents: A set of 30x30 battlemaps depicting an abbey or monastery hospital. The building contains a large hospital room, a refectory and rooms for the Sisters. There's also a small chapel. However, behind a secret door in the cellar is a secret infernal cult chamber, with a gateway to hell! Included: A… [...] 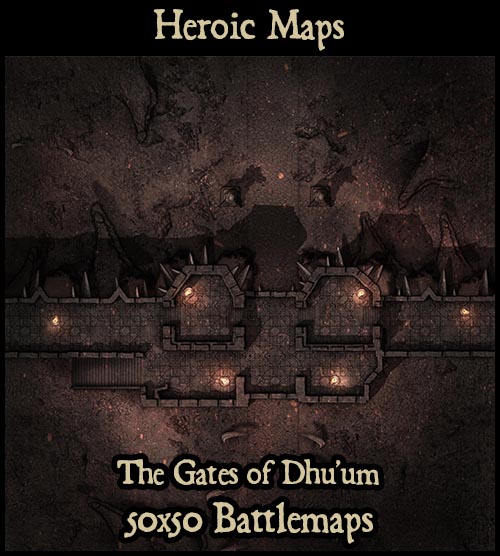 Publisher: Heroic Maps The Gates of Dhu'um The spike-walled black stone towers above you, as foul demons cackle from the battlements   A printable rpg battlemap compatible with any RPG/Dungeon-Crawl or skirmish game. Use as a standalone gameboard, or combine with any same-scale tileset.  Contents: A 50x50 battlemap depicting a huge set of infernal hell gates. Includes interior and exterior maps. Download includes: 300dpi A4 pdf (grid and griddless) 300dpi jpegs (grid and griddless) 72dpi (140px) VTT Ready files Note: Whilst the download looks large, it consists of several separate files - just download the versions you need. Price: $9.99 [...] 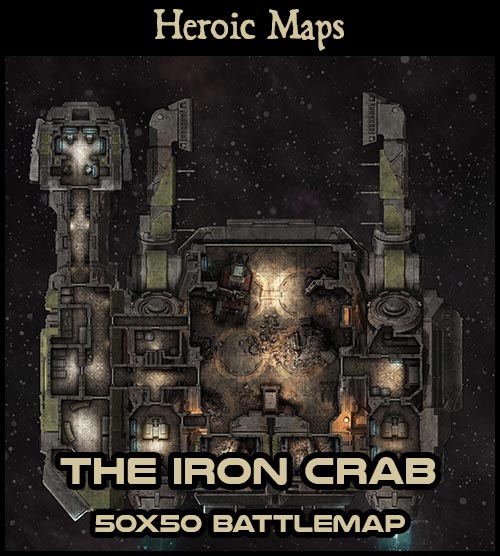 Publisher: Heroic Maps The Iron Crab - Salvage Vessel There's a fortune to be made for those brave enough to seize it!   A printable rpg battlemap compatible with any RPG/Sci-Fi or skirmish game. Use as a standalone gameboard, or combine with any same-scale tileset. The ship occupies approximately 50x50 tiles. Contents: A deep space salvage vessel. Includes claw hands for manipulating space junk, and a large hold to store the salvage. Also includes crew, bridge and engineering areas. Features interior and exterior maps. Download includes: 300dpi A4 pdf, with map spread across A4 pages for easy printing. 300dpi full… [...]