Frosthaven, the sequel to Gloomhaven by Cephalofair Games, finished big on Kickstarter becoming the most funded boardgame ever. A well-deserved success. Kickstarter is laying off 45% of its staff due to the 35% decline in active projects on the platform and absolutely nothing to do with their recent unionization. Battlestar Galactica has a space battle miniatures game we will be trying. Critter Hug is a new series by some of the cast of Critical Role. A good thing for the hobby or just good old fashioned payola. Never Going Home by Wet Ink Games is a World War occult roleplaying game set during the Great War with art by Charles Ferguson-Avery. The game mechanics and the setting look excellent. Dan Carlin’s Hardcore History has an great series on World War One if you want some background for this game.  A YouTube channel, Filmento is worth checking out if you like movies. Into The Night, a Belgian Netflix series, may provide good inspiration for a roleplaying campaign.
#frosthaven #nevergoinghome #wetinkgames

This week we discuss the Tales From the Loop Amazon series and the well-timed Free League boardgame on Kickstarter. Idle Red Hands is producing The Complete Mutant Chronicles, a video lore series about the Mutant Chronicles and Warzone setting. The Professional Nerd, @BryanCPSteele , announced that Res Nova has the license to produce a new edition of Warzone. The Man of Steel, Henry Cavill confirms his love for Warhammer 40k on Instagram. CMON ceases trading on the Hong Kong stock exchange because of “auditing issues”. They also launched a Kickstarter for Ankh: Gods of Egypt, which is third in the series of games by Eric M. Lang, including Blood Rage and Rising Sun. Fantasy Grounds reports a 150% boost in online sessions on their platform. Now maybe the time to see what a virtual tabletop is all about. The sequel to Gloomhaven is also live on Kickstarter. Frosthaven looks to be an equally impressive game and the designer, Isaac Childes, couldn’t deserve another big success more. He runs a great crowdfunding campaign. Here’s hoping things get back to normal soon and these projects go well.

Apologies for the sound quality this week. We recorded remotely for the first time since the shutdown in Japan. We will get the bugs worked out for next week.

Announcement of the new Warzone with the Professional Nerd, Bryan C.P. Steele:
https://www.youtube.com/watch?v=6uByYE0bsL0&t=2560s

Publisher: MongooseThe scene of bitter fighting in the Solomani Rim War, tensions still run high in the Solomani Front. In the Solomani Rim, hard-liners agitate for a campaign to retake Terra from the Imperials whilst dissidents plot secession from the Solomani Confederation. In Alpha Crucis, independent worlds seek to chart their own course despite interference from the Confederation. The Solomani Front is a land of opportunity, lying between the open worlds of the rimward fringe and the vast markets of the Imperium. Cross-border trade and diplomacy form a backdrop for covert operations, intelligence-gathering missions and backstreet skullduggery. With factions pushing… [...]

Publisher: Game Tile WarehouseSHARD ROADS I is part of a special map super-series called 'Meanders' which can be tiled like modular dungeon tiles. Meanders use a system of multiple repeating exit/entrance points to ensure the pathways always line up with almost 1600 other Meanders in dozens of varieties (and counting) for continuous, interchangeable terrains that feels random, sprawling with meandering pathways for adventurers to explore. Meanders can join to any other Meander from above, below, left or right, vertically flipped - regardless of genre or series - including itself. Some special Meanders known as 'Edgers' provide grand entrances or exits… [...] 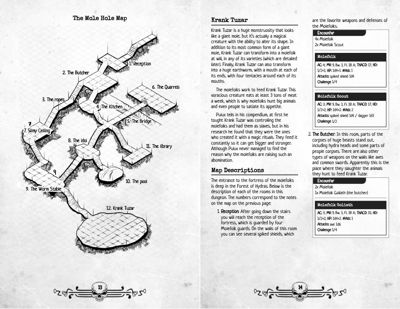 Publisher: XacurDark Scrolls is a 48-page, old style Black and White RPG zine, which aims to share inspiration for new content on RPGs, not just old school, but also newer ones based on 5th edition. The plan is, in each volume, to share content that is usable either right out of the box or with little modifications to fit your campaign. For example, the first volume will contain- A short dungeon/adventure with new monsters- 20 new magic item- New monsters from the dragon mountain- 18 new spells- Random tablesAnd more...Price: $7.00 [...]

Publisher: Fishwife GamesCyberpunk Side Adventure: Flawed Merchandise A mini side adventure for your cyberpunk themed rpg game! This system generic product features a 1 page location that functions as a drop in side mission. The Game Master (GM) is welcome to modify or add details to this product as they see fit.Background: A whole lot of nasty crap has been flooding the streets of the city lately. People have been getting permanent nerve damage from faulty unregulated neural processors and others are having hallucinations and other adverse reactions from a new supply of synthetic cocaine. Back alley cyber clinics are… [...]

Publisher: EDGE StudioHave you ever wanted to run a trial scene? Or a battle of the bands? Or some other social encounter where your players are competing with a foe to convince a third party? Genesys' structured social encounters provide a fantastic tool for direct adversarial encounters but run into issues where a third party is introduced. I Declare! provides a small system to address this gap. In this "micro-splat," you will find instructions for running structured adjudicated social encounters (SASEs), three new maneuvers specifically for SASEs, a new item type for SASEs which can also be used in standard… [...]